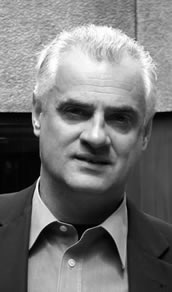 Stephen then set up the Mission which produced film and television programmes including Bring Me The Head of Mavis Davis with Rick Mayall and Jane Horrocks as well as Everybody Loves Sunshine with David Bowie.

Joining Karen Mitchell at Giraffe, Stephen began to specialise in healthcare. He advised the Department of Health, DWP, HFEA and NHS England. He worked on the original strategy for Healthcare UK and worked on the policy and project managed the launch of the National Institute for Sports & Exercise Medicine to fulfil the Olympic commitment for the London 2012 Games.

Stephen also developed the original concept for the NHS Healthcare Expo that went on to be the largest healthcare innovation event in Europe. Also, he consulted with the Department of Health for overseas patients and ran a reference site for EEA patients at UCLH.

Stephen has specialised in healthcare innovation and its spread. He ran the HiTAP programme in partnership with NTACH to spread high impact innovations across Yorkshire and the Humber. Also he has worked with trusts in Wales and Northern Ireland to develop more innovative approached and pathways.

Recently he has created the content for UK e-Health Week and helped develop the Sustainable Healthcare programme and awards with the College of Medicine, Patient Information Programme, NHS Alliance and AbbVie. Also, he has developed and ran a recent conference for the Bevan Commission.

Stephen in on the board of the Institute of Sport & Exercise Medicine, a fellow of the British American Project and a trustee of UpRisng and the Young Actors Theatre.